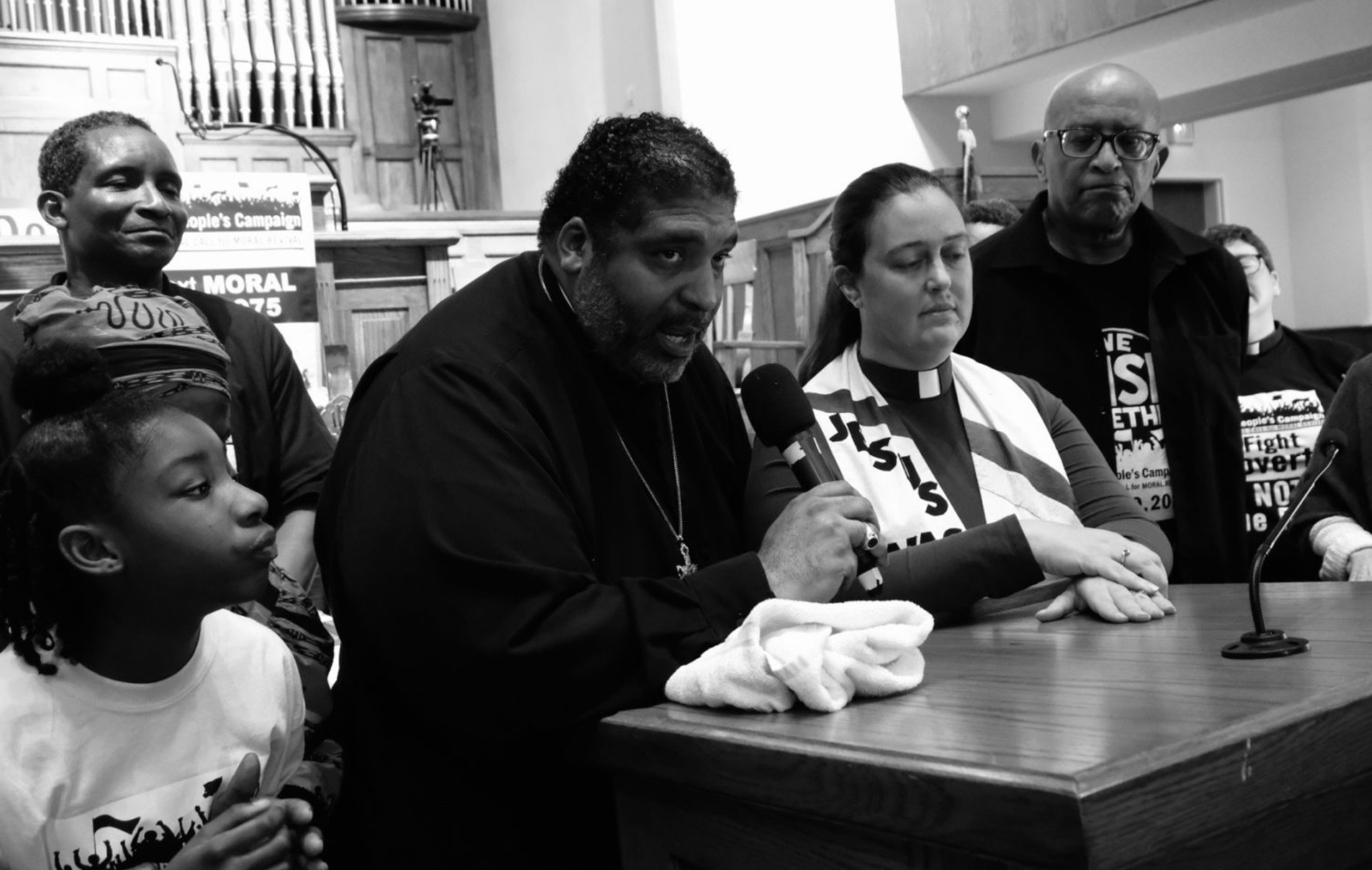 Fifty years ago, the Rev. Dr. Martin Luther King, Jr. and many others called for a “revolution of values” in America. They invited people who had been divided to stand together against the “triplets of evil”—militarism, racism, and economic injustice—to insist that people need not die from poverty in the richest nation ever to exist. They sought to build a broad, fusion coalition that would audit America. Together, they would demand an accounting of promissory notes that had been returned marked “insufficient funds.” Today that effort is still incomplete.

The Poor People’s Campaign: A National Call for Moral Revival has developed out of years of organizing across the United States. In communities across this land, people impacted by systemic racism, poverty, ecological devastation, the war economy and our distorted moral narrative have said the same thing: “We want to be free! We need a Poor People’s Campaign! We need a Moral Revival to make this country great for so many for whom it has not yet been.” This call echoes the cries of the prophets throughout the ages to stand up for justice, righteousness and the dignity of all:

If you remove the yoke from among you, the pointing of the finger, the speaking of evil, if you offer your food to the hungry and satisfy the needs of the afflicted, then your light shall rise in the darkness and your gloom by like the noonday. The Lord will guide you continually, and satisfy your needs in parched places, and make your bones strong; and you shall be like a watered garden, like a spring of water, whose waters never fail. Your ancient ruin shall be rebuilt; you shall raise up the foundations of many generations; you shall be called the repairer of the breach, the restorer of the streets to live in. (Isaiah 58)

The Spirit of the Lord is upon me, because he has anointed me to bring good news to the poor. He has sent me to proclaim release to the captives and recovery of sight to the blind, to let the oppressed go free, to proclaim the year of the Lord’s favor. (Luke 4:18-19)

These moral values are enshrined in the Declaration of Independence and U.S. Constitution and deeply rooted in the struggles that have labored to lift those founding documents to their full meaning:

We hold these truths to be self-evident, that all men are created equal, that they are endowed by their Creator with certain unalienable rights, that among these are Life, Liberty and the pursuit of Happiness. That to secure these rights, Governments are instituted among Men, deriving their just powers from the consent of the governed. That whenever any form of Government becomes destructive of these ends, it is the Right of the People to alter or to abolish it, and to institute new Government, laying its foundation on such principles and organizing its powers in such form, as to them shall seem most likely to effect their Safety and Happiness. (Declaration of Independence)

And in American history, as throughout the rest of the world, — from abolition, to women’s suffrage, to labor and civil rights — real social change has come when those most impacted by social injustice have joined hands with allies of good will to stand together to transform and better society. These movements did not simply stand against partisan foes. They stood for the deep moral center of our Constitutional values and faith traditions. Those deep wells sustained those who knew in their bones both that power concedes nothing without a fight and that, in the end, love is the greatest power to sustain a fight for what is right.

Today, 50 years after Rev. Dr. King and the 1968 Poor People’s Campaign declared that “silence was betrayal,” we are coming together to break the silence and tell the truth about the interlocking evils of systemic racism, poverty, ecological devastation, the war economy and our distorted moral narrative.

The truth is that systemic racism allows us to deny the humanity of others; by denying the humanity of others, we are given permission to exploit or exclude people economically; by exploiting and excluding people economically, we are emboldened to abuse our military powers and, through violence and war, control resources; this quest for the control of resources leads to the potential destruction of our entire ecosystem and everything living in it. And the current moral narrative of our nation both justifies this cycle and distracts us from it.